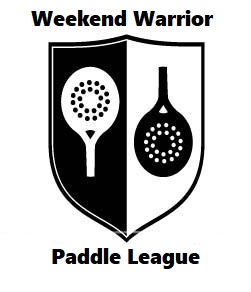 The 11th season of the Weekend Warriors Paddle League (WWPL) ended with a Playoff Finals & Celebration at the newly-renovated KLM Paddle Hut on Saturday, February 26.

Flight C Final was played earlier finishing with a 3-set battle on the third and deciding match. First year captain Matt MCGovern’s team prevailed to take it all. They also finish the regular season in first.

In addition to the 24 players, the Finals Celebration attracted about 25 Warriors from other teams to enjoy burgers, brats, chili and beverages on a perfect day to watch some competitive paddle matches, as well as get in a few sets with players from other teams and flights.

The WWPL was started in 2011 by players from 3 clubs (Hinsdale Paddle, Salt Creek Club, and Hinsdale GC) with goals to develop stronger relations among the area’s fast-growing paddle-playing community.  This year, we had 135 participants on 14 teams (plus subs) representing 10 clubs!

Congratulations to the winning teams, all the players and captains for making this a great season! Special thanks to Commissioner Rob Foster for all he does to run this league.

If you have any questions about Hinsdale Paddle, please fill out the form and we will be back in touch shortly. If you need immediate assistance with the website or would like to discuss membership programs or other aspects of Hinsdale Paddle, please contact Rick Larsen at ricklarsen007@gmail.com (men and family memberships) or Mary Doten at mhdoten@gmail.com for questions on the women’s programs and lessons/training programs. If you are having questions or issues with the website, please contact Mark Schaub at  mark.schaub@tapworx.com